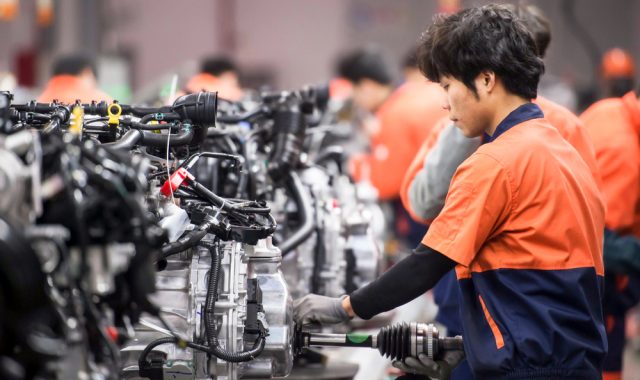 With global manufacturing feeling the pinch of Sino-US trade tensions, figures for August reveal that Chinese manufacturing growth has hit a 15 month low.

With tariffs coming into force, Chinese businesses have seen the prices of imported goods jump at the same time as the number of export orders dipping for the fifth consecutive month; both of which have played a role in factory bosses having to cut staff.

While manufacturing output has not decreased, China’s PMI looks daunting. The PMI or Purchasing Managers’ Index is a measurement done by The Institute for Supply Management (ISM), which uses a monthly survey of a company’s new orders, inventory levels, production, supplier deliveries and employment to gauge performance. PMI is measured out of one hundred, with a score being allocated based on the number of answers indicating improvement, no change, or decrease – a score over fifty indicating a positive change.

The latest data published this morning by Caixin and research group Markit, show that China’s PMI stands at 50.6 for August, down 0.2 from the month before.

Chinese analysts have so far forecast that this trend is likely to continue going forward, with tensions persisting and the possibility of further tariffs looming in the autumn. The bleak outlook for manufacturing has been shared by European companies over the summer, with British manufacturing figures from within the hour appearing equally bearish.