Despite the big miss on the headline figure the US jobs picture remains relatively robust with unemployment steady at 4.1%.

Analysts at Faraday Research noted downward revisions to previous months releases but the market took the disappointment in it’s stride with US equity futures little changed.

Adding to the NFP disappointment, there were -50k negative revisions to the last two months’ reports.

In the immediate aftermath the FTSE 100 rallied back to flat for the day while the dollar index added to gains. 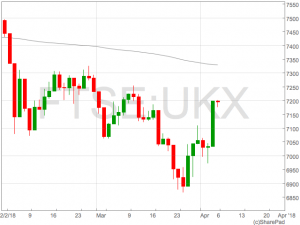 Today’s move sustains a week of gains for the FTSE 100 which managed to shrug of the fears of a trade war and continue its rebound from sharp declines through February and March.

FX markets remained subdued with GBP/USD showing no signs of breaking the tight range 1.4000-1.4100 in has traded in for most of the week.