In 2019 when US President Trump initiated the trade war with China, Vietnam emerged as a winner, with several multinational companies looking to relocate some or all of their manufacturing outside of China to mitigate political risk and avoid penalties and higher tariffs. This became known as a ‘China-plus-one’ strategy. In 2020, COVID-19, and Vietnam’s quick and effective responsive to the pandemic, further strengthened the case for including Vietnam as part of a diversified supply chain. Trump’s pre-election rhetoric of ‘decoupling from China’ included the need to identify alternative countries to supply inputs to the US economy. If this thinking persists into a second Trump term, or a first Biden term (and China bashing has bi-partisan support) then we can expect rapid expansion of investment in manufacturing capacity in Vietnam.

Vietnam is a country of almost 100 million people and is a fast-growing economy with multi-decade growth rate in GDP of more than 6%. Much of this growth has resulted from an increasingly open approach to global trade since it became the seventh member of the Association of Southeast Asian Nations (ASEAN) in July 1995 and the 150th member of the World Trade Organization (WTO) in 2007. In the same month Vietnam joined ASEAN, the United States re-established diplomatic relations, putting the Vietnam War behind them and developing strong bilateral and economic ties. The opportunities for the development of the Vietnam Economy and for US enterprises to invest in the country had been identified in the late 1960s, as reported to me by an early investor in Vietnam Holding (LSE: VNH) who was stationed in Vietnam at the time.

Vietnam – the beneficiary of trade and foreign direct investment (FDI)

In 2019, Vietnam saw record levels of Foreign Direct Investment (FDI) – almost USD 20 billion. The coronavirus pandemic has impacted this in 2020, in part as there have been fewer flights into the country since the imposition of quarantine, but the trend is still very favourable. In the first eight months of 2020, FDI into Vietnam dropped 5.1 percent from a year earlier to USD 11.35 billion. The manufacturing and processing sector is set to receive about 48% of pledged investment.

Vietnam also enjoyed a record trade surplus in 2019 which has continued into 2020. In August the Trade Surplus was close to USD 4 billion, the largest monthly level since 1990, taking the surplus for the first eight months to USD 12 billion.

The combination of FDI, Trade Surplus and the significant inward remittances of money from the millions of Vietnamese who live and work outside of the country, contributed to a record level of foreign reserves, which is forecast to reach USD 100 billion by the end of 2020. This financial strength has helped Vietnam to buffer the impact of COVID-19, and to keep its currency, the Vietnamese Dong, stable against the US Dollar. Many analysts consider the Vietnamese Dong, and other emerging currencies, to be likely beneficiaries of a weakening US dollar. In a country where interest rates are around 3%, and with forecast economic growth of 2.5% to 3.0% (one of few economies with positive growth this year), Vietnam could attract further money flows.

What sectors to invest in to take advantage of Vietnam’s opportunities?

Vietnam’s per capita GDP has now passed USD 3,000. This is seen as an inflection point in an emerging consumer society. When Thailand reached this level, its per capita GDP doubled again in seven years, and when China reached this level it saw a doubling in five years. More money in the pocket of consumers, more choice in where and how to spend it, means the consumer sector and the companies operating in the space will see tremendous growth in the mid-term. The banking sector is also set to benefit as currently almost 70% of adults in Vietnam (that’s 50 million people) are unbanked. As affluence increases – and a further 35 million middle class consumers are added to the population by 2035 – omni-channel banking (branches, ATMs and online apps).

The rise in foreign direct investment means that there is greater opportunity for investment in the process of industrialization. The price of industrial land is set to increase and there will be greater domestic and foreign investment in infrastructure, which has a multiplier effect in emerging markets. Much of the investment is expansion of existing capacity and ‘green-field’ development of new capacity. Not only does this put money in the economy in the form of employment and consumption of materials (steel, concrete et cetera), but improved infrastructure makes the economy more efficient with faster transportation of goods, shorter commute times, lower costs and the opening up of new areas to live and work, and the industrial and residential services that this creates demand for.

The changing demographics and increasing levels of wealth also create a trend to more urbanization. This is reflected in the demand for better housing, demand for better utilities (clean water and electricity, the latter increasingly produced from wind and solar), modern transportation, healthcare and convenience stores.

How to invest in Vietnam?

Many of the world’s sovereign wealth funds, and large global investment firms have significant investments in Vietnam. For most individuals living outside of Vietnam, it can seem to be a daunting process to invest. To buy Vietnamese stocks directly you need to have a trading code, a local bank account and a custodian for your shares. You need to bring in foreign currency, convert to local Vietnamese Dong, and then select some stocks to buy, or buy a local exchange traded fund (ETF). This is possible, but by no means easy or realistic for most UK investors.

Another way is to buy a passive ETF listed in the UK. While this can appear to be a relatively low-cost way to try and get some exposure to Vietnam, it can have some unintended consequences. One of the problems in this approach is that many of the ETFs are ‘synthetic’ in that they don’t actually hold the underlying stocks, but instead, try to replicate the performance of an index using derivative instruments, or participatory notes that try to track the performance. This can lead to significant differences in the performance of the ETF and the Vietnam market as a whole, as reflected in an index. Another problem is that there is no active stock selection or little screening in an ETF, meaning that you get the good, the bad, and the ugly. With more investors seeking sensibly to align their investment objectives with their desire to invest responsibly, an active fund that applies sound Environmental, Social and Governance (ESG) screening and monitoring may be a better choice. 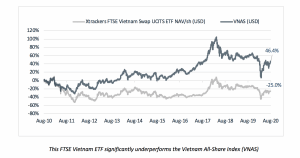 Once such fund is Vietnam Holding (LSE: VNH), a closed-ended investment company listed on the London Stock Exchange. VNH has been a signatory of the United Nations Principles for Responsible Investing (UNPRI) for over a decade, and features ESG thinking into its investment decisions. It was recently awarded top marks by the UNPRI. VNH is an actively managed fund, supported by a Vietnam-specialist fund manager with a team of 12 professionals on the ground. It is entirely invested in Vietnam, with a portfolio of 24 leading companies, following the core themes of Industrialization, Urbanization and Domestic Consumption. Over the last decade the fund’s Net Asset Value has outperformed the Vietnam All-Share index (VNAS), increasing by 90% versus 46% for the VNAS. 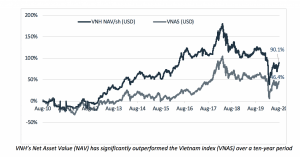 Shares in Vietnam Holding can be bought and sold through your stockbroker or wealth management advisor. There is no minimum investment size and the Company publishes its performance (movements in the value of the underlying portfolio of stocks) on a daily basis. A three-to-five-year investment horizon is recommended for investors.

This article was written by Craig Martin, Chairman of Dynam Capital Limited. Dynam is the Guernsey regulated fund manager for Vietnam Holding (LSE: VNH). Investors should do their own research or consult with their advisors before making a decision to invest in stocks, and the value of investments can go down as well as up.