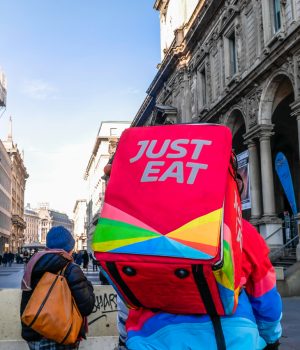 Takeaway.com NV (AMS: TKWY) have accused Prosus (JSE: PRX) of scaremongering on Tuesday as the battle for the acquisition of Just Eat (LON: JE) continues to heat up.

The story of Just Eat has been spiraling news headlines for a while now, and in the most recent saga at the end of November, it appeared that both parties from takeaway.com and Just Eat looked to push a deal amid market pressures.

However, the persistence of Prosus (JSE: PRX)  has stopped the two firms agreeing a deal, as Prosus have expressed strong interest in the FTSE100  listed Just Eat.

In the initial deal proposed at the end of July,  Just Eat shareholders would get 0.09744 Takeaway.com shares for each Just Eat share held, which valued Just Eat at 731 pence per share based on Takeaway.com’s closing share price on July 26 of €83.55.

The bid submitted by Prosus showed a 20% appreciation to Takeaway.com’s offer.

On 25th November, Just Eat told shareholders to back the deal submitted by Takeaway.com and neglect the substantial £4.9 million bid that was proposed by Prosus.

Today, it seems that Prosus have used anticompetitive practice in an attempt to scare of competition.

Takeaway.com on Tuesday said it “believes Prosus has made a number of statements which should be seen as scaremongering in an attempt to persuade shareholders to sell out and accept Prosus’s low-ball cash offer.”

Jitse Groen, Takeaway.com’s chief executive, said: “Prosus has made a number of claims over the last few weeks in an attempt to make its highly opportunistic cash offer for Just Eat appear more attractive. It persistently makes contradictory assertions about large future investment requirements and significant risks for shareholders in remaining invested in Just Eat, while itself wanting to assume those apparent costs and risks.

“Our strategy, management team, operational capability and perfect geographic fit make us the ideal partner for Just Eat. The all-share merger with Takeaway.com gives Just Eat shareholders the ability to participate fully in the value creation opportunity. Takeaway.com’s management team has a proven track record and decades of experience within the online food delivery sector, which contrasts with Prosus who have never operated a business within it.”

The comments come as familiar reading following statements from Cat Rock Capital Management LP, who said on Monday that Just Eat shareholders would be better accepting the deal proposed by takeaway.com rather than from Prosus, who recently spun off from Naspers (JSE: NPN).

Cat Rock holds 17.7 million shares in online takeaway platform Just Eat, equivalent to a stake of around 3%. On Monday it sent an open letter to Just Eat’s shareholders, urging them to accept the Takeaway.com merger, and had every right to voice their interests seeing the size of their contributions in Just Eat.

Alex Captain, founder & managing partner at Cat Rock, said: “The Prosus offer of 710p per share is not remotely close to our assessment of fair value for Just Eat. We think a Prosus bid needs to be at least 5.0 times 2020 consensus revenue, or 925p per share, in order to compete with a Takeaway.com merger that we believe could comfortably be worth 1,200p per share by the end of 2020.

Captain also said that while Cat Rock is pleased Just Eat received a bid from Prosus, the level of the offer has left it “deeply disappointed”. He also lashed out at “a number of claims about Just Eat and Takeaway.com” which Captain said were “aimed at convincing shareholders not to support their merger”.

“If this occurs,” said Capitain, “Just Eat shareholders who choose not to accept the Prosus offer will be faced with the prospect of becoming minority shareholders in a publicly-traded entity with majority Prosus ownership. Therefore with a 50% threshold, Just Eat shareholders could feel compelled to accept a Prosus bid that is substantially below fair value, particularly if merger arbitrage funds continue to increase their ownership of Just Eat stock.

“We urge other Just Eat shareholders to join us in accepting the Takeaway.com offer that the Just Eat Board has unanimously recommended.”