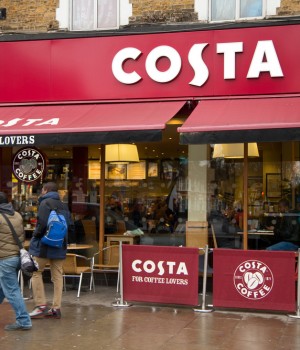 Whitbread (LON: WTB) has announced that it is selling the Costa coffee chain to Coca-Cola (NYSE: KO) in a £3.9 billion deal.

Following the sale, Whitbread will focus more heavily on Premier Inn chain of hotels in the UK and Germany.

“This is one of those beautiful moments where everybody is a winner. This is a significant premium than what could have been created by spinning it off alone,” said the Whitbread chief executive Alison Brittain.

“This transaction is great news for shareholders as it recognises the strategic value we have developed in the Costa brand and its international growth potential and accelerates the realisation of value for shareholders in cash,” she added.

“You could see Costa absolutely everywhere, in vending machines, hotels, restaurants, pubs, cafes – in all the places you see Coke today.”

News of the deal sent shares in Whitbread soaring 17.3 percent to £47.17 in early trade.

Whitbread bought the group in 1995 when it had just 39 outlets for just £19 million.

The group announced earlier this year that it was planning to spin off its Costa Coffee branch.

Nicholas Hyett, an equity analyst at Hargreaves Lansdown, said the deal is “a bitter-sweet moment for Whitbread investors”.

“On the one hand, £3.9 billion is an undeniably rich valuation and likely far better than Costa could achieve as an independently listed company, valuing its earnings higher than those of the mighty Starbucks,” he said.

“On the other, Costa has long been the jewel in Whitbread’s crown and some will be sad to see it go at any price, especially given the growth potential in China and elsewhere,” he added.

The deal is expected to be completed in the first half of next year.