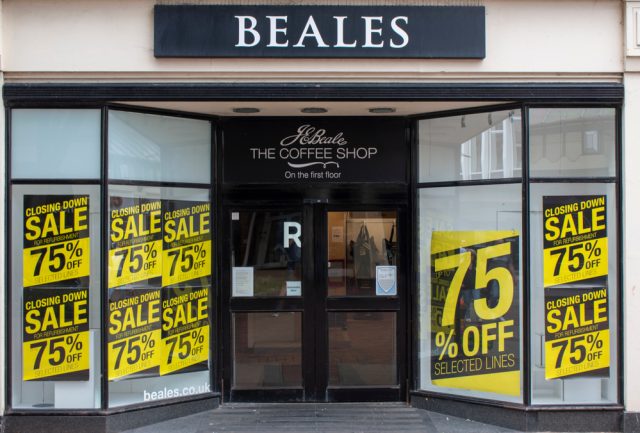 Beales, one of the biggest British name stays on the high street has collapsed today and fallen into administration.

Beales initially appointed KPMHG as administrators after it was reported that they could not find a new investor or buyer for the British high street department store.

Beales stores will continue to trade, however there will be no immediate store closures but the website is now inactive.

KPMG said: “Despite interest from a number of parties, this process did not secure any solvent solutions for the company, and as a result, the directors took the difficult decision to place the companies into administration.”

KPMG’s Will Wright, who is the joint administrator to Beales, said: “With the impact of high rents and rates exacerbated by disappointing trading over the Christmas period, and extensive discussions around additional investment proving unsuccessful, there were no other available options but to place the company into administration.

“Over the coming weeks, we will endeavour to continue to operate all stores as a going concern while we assess options for the business, including dealing with prospective interested parties.”

He added that during this period gift vouchers, customer deposits and customer returns/refunds will continue to be honored.

The company had been stumbling following rent reduction talks and a Company Voluntary Arrangement, and reports suggested two potential buyers had been lined up.

Chief Executive Tony Brown told local newspaper The Daily Echo before the administration that the retailer has struggled with difficult trading conditions and criticized the “lunacy” of high business rates.

He said: “I can’t predict which stores will stay and which stores won’t because it all depends on landlords and local government.”

Speaking to the BBC last week, he said: “We’ve only managed to get one council to help us out on a temporary basis.

“Landlords – not all of them but predominantly most of them – have been helpful and they see a long term.

“Now don’t get me wrong, the high streets do need to develop, but there has to be a timescale on which that’s done by.

“At the moment, in my view, councils really don’t care, because they get their business rates whether we’re there or not, because the landlord pays if the store closes.”

The collapse started with House of Fraser, which collapsed in 2018 however Mike Ashley and Sports Direct (LON:FRAS) rescued the firm following takeover talks.

At the start of November, it was reported that Mothercare plc (LON:MTC) had entered administration.

All 79 of Mothercare’s UK stores are set to shut as administrators get the ball rolling to close this case.

The UK firm “has been loss-making for a number of years”, but international franchises are profitable, PwC said.

In November, it was announced that the baby goods firm was not making sufficient profits and that management had failed to find a buyer.

Joint administrator Zelf Hussain said: “This is a sad moment for a well-known High Street name,” adding that Mothercare “has been hit hard by increasing cost pressures and changes in consumer spending.”

“It’s with real regret that we have to implement a phased closure of all UK stores. Our focus will be to help employees and keep the stores trading for as long as possible,” Mr Hussain said.

Additionally, the firm showed no sign of recovery as it posted a wider loss just a month on.

Mothercare said that, for the 28 week period to 12 October, group loss before tax amounted to £21.2 million, deeper than the £18.5 million loss posted the year prior.

Total UK sales declined 19.2% over the period, Mothercare said in its results.

Its’ UK business is not alone in feeling the bite of the tough trading conditions to hit the UK high street.

“It was simply not financially viable to maintain the UK store estate and supporting infrastructure any longer without putting the whole Mothercare Group at risk,” Mark Newton-Jones, CEO of Mothercare, commented on the results.

Beales falls victim to the cut throat nature of the UK high street, which looks increasingly more tough for companies to trade on. Certainly a stimulus will have to be provided in order to stop the list of collapsing businesses.