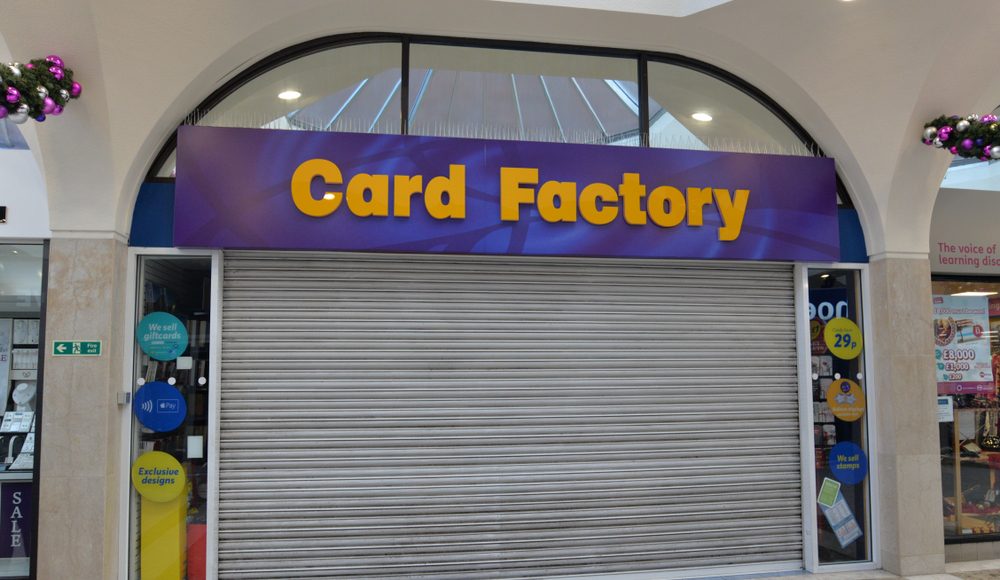 Card Factory (LON:CARD) have seen their shares crash on Thursday as the firm expects annual earnings to decline following a tough festive period.

Revenue in the eleven month period to December 31 was 3.6% which saw an increased from the 3.4% figure in the same period year on year. However, the firm said that like for like sales declined by 0.6%, which alerted shareholders.

Card Factory added that it had 47 net store openings in the UK and Ireland so far in the financial year, and the new stores are performing well.

The firm said that the total portfolio totals at 1,019 stores which 13 of which are based in Ireland.

Notably, the firm said it is not rack to meet its target of 50 net new stores openings, highlighting its “solid pipeline” of new opportunities.

The online unit saw positive revenue growth of 15% year on year during the 11 months, however over the same period last year revenue online rallied 59%.

The company said after the festive period it expects adjusted underlying earnings before interest, tax, depreciation and amortisation, also excluding IFRS 16 adjustments, to be in the ballpark of £81.0 million and £83.0 million in the current financial year.

Alerting shareholders, this could show a decline by 9.4% from the £89.4 million last year.

Speculating further to 2021, the firm said its adjusted underlying Ebitda could take a hit off up to £10 million, amid more declines in high street footfall and a depressed pound.

However, shareholders will be disappointed by saying that the company did not expect to pay a special dividend during the 2021 financial year.

Card Factory didn’t comment on the dividend for financial 2020 other than to say it remains committed to its current dividend policy. For the first half of the year, it kept both the ordinary and special dividends flat, at 2.9 pence and 5.0p respectively.

There was some optimism for the firm as they enlightened the market about a deal struck wit The Reject Shop Ltd (ASX:TRS) an Australian discount shop chain with 360 stores in the country.

The company will update shareholders of its strategic review, when it reports its full-year results on April 21.

“Management was able to offset the footfall decline, in part, by once again increasing average transaction value. This was achieved by making more sophisticated use of data to improve ranging decisions, as well as continuing to improve the quality of products offered.”

The company explained: “To date there has been significant success in mitigating in large part the Ebitda impact of these external factors through a combination of offer improvements and business efficiencies. These efforts will continue, but the opportunity for efficiencies within the current business model is finite.

“Accordingly, the board anticipates that, on a business as usual basis, the net impact of market headwinds on financial 2021’s adjusted underlying Ebitda is likely to be in the range of GBP5 million and GBP10 million.”

Card Factory concluded: “The review is not yet complete, but the board is confident that it will yield a number of attractive medium term growth opportunities across both new and existing channels, albeit there may be a requirement for additional strategic investment in financial 2021 to support this future growth.”