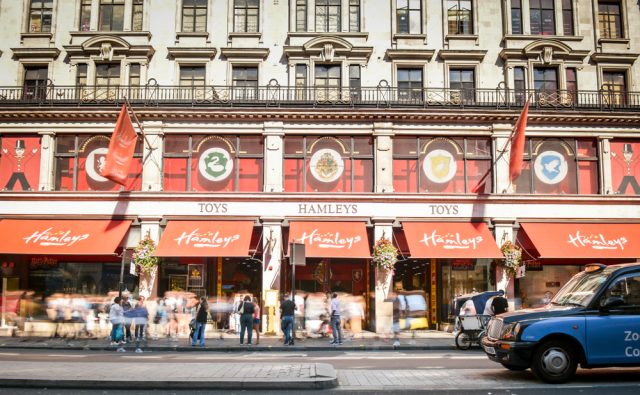 London’s iconic toy store Hamleys has been sold to Reliance Brands Limited in a deal of almost £70 million.

Hamleys was originally founded in 1760, making it the world’s oldest toy retailer. Its iconic store in the heart of London attracts adults and children alike, both tourists and Londoners.

The flagship store on Regent Street boasts seven floors of toys and games, moving to the location in 1881.

Hamleys currently has 167 stores in 18 countries.

Reliance Brands Limited is owned by Mukesh Ambani, India’s wealthiest man, and it currently operates a chain of 88 Hamleys stores.

Hamleys had “pioneered the concept of experiential retailing,” said Reliance Brands’ Chief Executive, Darshan Mehta, according to the Guardian.

“The worldwide acquisition of the iconic Hamleys brand and business places Reliance into the frontline of global retail,” Darshan Mehta continued.

“Over the last few years, we have built a very significant and profitable business in toy retailing under the Hamleys brand in India.”

In the UK, retail sales rose 1.1% in March as milder weather encouraged shoppers to hit the high street, according to latest figures from the Office for National Statistics. This increase is despite the gloomy trading environment to veil the high street over the past few months.

In fashion retail, JD Sports also beat the retail gloom as it posted an increase in its annual pre-tax profit, confirming its confidence amid Brexit uncertainty.

Many, however, have released warnings surrounding the current trading environment, with Primark warning of the “challenging” retail landscape.

Mike Ashley told MPs at the end of last year that the internet was to blame for killing the high street, appearing in front of parliament in December to discuss its future.