Vietnam is a high growth market situated in the heart of Asia. Its cohesive population of 100m people is young, hard-working and increasingly digitally connected. Over the last 30 years, Vietnam has experienced high levels of GDP growth, averaging about 6 to 7% and attracting record levels of Foreign Direct Investment (FDI) with almost USD 20 bn in 2019. It also is an increasingly open economy, with trade equivalent to 200% of GDP, and the government has negotiated a number of free trade agreements.

Vietnam is one of the original countries in what was formerly known as the Trans-Pacific Partnership TPP and is now the somewhat unpronounceable alphabet soup of the Comprehensive and Progressive Agreement for Trans-Pacific Partnership (CTCPP). In addition, Vietnam recently approved a bilateral EU free trade agreement, which could serve as a model for a new free trade agreement with the UK.

Perhaps more important than a static GDP number is the per capita GDP which has just recently passed USD 3,000, which is considered an inflection point in an emerging consumer society. For example, Thailand doubled its GDP from this point in seven years and China doubled its within five years.

V for Victory – against the coronavirus

Vietnam declared war on the coronavirus in late January and emerged victorious in containing it within about 90 days by the end of April. The government was very quick to react when the first cases were confirmed during the Lunar New Year (‘Tet’) holiday in January by imposing a large-scale quarantine, stopping flights to China, and implementing control and trace to identify outbreaks. It also employed all the tools in the ‘media’ armory to keep its citizens informed via social media, traditional media, as well as propaganda art.

Vietnam is in many ways a Confucian ‘East-Asian’ society, with strong community values, and an adherence to authority. Its social cohesion and the government’s effective response meant that Vietnam was one of the first countries to come out of lockdown at the end of April after a relatively short three-week lockdown. Since mid-April there have been no community spread cases, and remarkably, in a population of close to 100m people, there have been less than 400 infected cases in total and zero deaths. The closest someone came to death was a British pilot with Vietnam Airlines, the National Carrier, an unfortunate super-spreader which created a cluster of infections around a popular expat-bar in Ho Chi Minh City’s District Two.

He was in a coma and at death’s door for almost 100 days in an Intensive Care Unit in Vietnam. The Vietnamese people rallied around him, even offering him their own lungs, and he went on to make a complete and full recovery. He has now returned to his home city of Motherwell in the UK, saying that ‘I would have died’ if it were not for Vietnam. 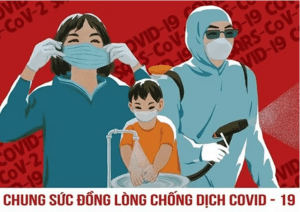 Vietnam has the potential to make a V-shape road to recovery post-pandemic. The Purchasing Managers Index (PMI) rose sharply from the depths of the pandemic, as the country gradually went back to work. Retail sales have also been rising, though some discretionary spending has been unsurprisingly delayed.

The GDP growth for the first six months of 2020 was 1.8%, and the full year is expected to be somewhere between 3% and 4%. This is lower than the 6-7% trend but is a rare positive number in a world of fearful negative growth forecasts.

Prospects for Vietnam will be strengthened as more manufacturers look to its proximity to key markets and abundant, well-educated and young workforce as a powerful source of production. Last year’s trade spat between the US and China accelerated a ‘China-plus-one’ strategy as supply chains are increasingly being broadened in an attempt to diversify risk and bend costs down. Vietnam has seen decades of strong FDI into the manufacturing sector and has enhanced its logistics and business-to-business (B2B) services to facilitate this growth.

A number of international companies started to relocate to Vietnam, and we see strong evidence of that trend continuing as Apple and other global brands look to increase what they make in Vietnam. That will also have a positive knock-on effect in the private sector. Other parts of ASEAN, Singapore and Thailand, adopted a Michael-Porter inspired ‘cluster’ approach to creating centres of specialized large-scale manufacturing in the 1980s and 1990s (e.g. hard disk drives in Singapore and Thailand, semiconductors in Singapore, and automotive component and finished vehicles in Thailand’s coastal Rayon region). This approach can lead to a localized supply chain of the master-supplier, an Apple or Samsung, for example, and then its myriad of sub-contractors. This notion has already attracted Samsung, which makes nearly every tablet and phone in Vietnam with close to 100,000 employees across the country and has accelerated the expansion of its industrial park.

In addition to the planned investment by the government into infrastructure (a total amount of USD 30 bn over the next few years), Vietnam’s private sector will also see increasing opportunities. The government recently passed a Private-Public-Partnership (PPP) to encourage private investment as a means to finance infrastructure. Unlike the UK where the government plans ‘brown-field’ rejuvenation of existing commercial and retail centres in an attempt to breathe life into hollowed-out sectors, much of the infrastructure development in Vietnam is in ‘green-field’ projects that are known to have a multiplier effect on economic growth.

After a few years of hibernation, the privatization of state-owned assets and enterprises will resume this year. The government is committed to selling off equity stakes in companies that become listed, or indeed privatizing businesses for the first time. One of the companies set for sale is the country’s largest brewer (and the world’s 20th largest brewer by volume) Sabeco (HOSE: SAB), which produces the popular Saigon and ‘333’ rice-brewed beers. Vietnam’s beer, and when served cold makes a great accompaniment to the fragrant flavours of Vietnam’s delicious noodles and spring rolls, as visiting celebrities like Obama and Bourdain have attested to.

Private capital in the form of private equity has also been growing rapidly over the past 15 years since the first major amendments of securities and enterprise laws were passed. In 2005, the new laws enabled different share classes, including preference shares, to be used in structuring private equity investments.

These structures can help bridge the gap of valuation expectations where capital is sought by selling a minority stake to an investor who can help grow the company. One such investment was in a private property company 15 years ago. This company went on to list on the stock exchange, the investor made a very handsome return on their investment, and the company went on to work with many other institutional investors, attracting hundreds of millions of foreign capital. The company, including its subsidiaries, is now worth about USD 30bn and accounts for around 20% of the local stock market.

Most importantly perhaps for UK investors, is the way in which the capital markets have grown and deepened. Daily liquidity across Vietnam’s stock markets is currently around USD 350m. This is more than the entire size of the market back when the UK’s Prudential (now Eastspring) was an early successful investor on behalf of its Vietnamese life insurance customers in the capital markets.

Vietnam Holding (LON: VNH) was established in 2006 and since 2009 has been an adopter of the UN’s Principles on Responsible Investing (UNPRI). Originally listed on the AIM market in 2019, the Investment Trust moved to the premium segment of the wider market. It now manages a concentrated portfolio of around 25 Vietnamese companies across three main themes: Industrialisation, Urbanisation and the Domestic Consumer. Over the last decade, VNH has backed many companies that have gone on to become significant well-known brands. Identifying good mid-cap companies takes patience and requires a local-on-the-ground presence.

VNH also thoroughly screens and engages with companies from an environmental, social and governance (ESG) perspective. Buying an index, or ETF, is another way to access the Vietnamese market, but gets you the good, the bad and the ugly.

VNH is able to invest across a spectrum of opportunities, from smaller private companies looking to list in a couple of years, through mid-cap companies growing at more than 20% per annum to the larger business opportunities with over USD 1 bn in market value (‘large cap’ stocks). Over the years, a number of small-to-mid cap stocks have enjoyed such impressive growth compounding that they are now in the ranks of the large-caps. VNH is approximately 65% invested in large caps and 35% in mid-caps, with an average company size of USD 500m. VNH typically holds up to 5% percent in a company and routinely engages with its management and boards on good governance, transparency, environmental impact and corporate social responsibility.

The CIO of Dynam Capital, Vu Quang Thing, co-founded the Vietnam Institute of Directors, and is an acknowledged authentic voice on board best practices and investor reporting and relations. 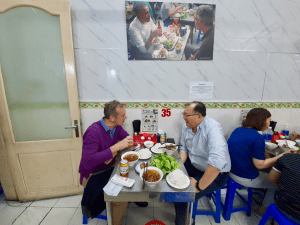 Although Vietnam has many of the characteristics of a more recognized ‘emerging market’ in part due to the size of the equity market already being above USD 160 bn, and with more than 1,500 companies to invest in, it is still classified by MSCI as a frontier market. In fact, this year Vietnam is likely to be the largest component of the Frontier Market Index. As a frontier market, it is estimated that only one in five emerging market investors are present: it will be a game changer in a few years if and when Vietnam is classified as an MSCI Emerging Market.

Vietnam has emerged from the covid-19 crisis as a winner. Its capital markets are set for expansion, the infrastructure is improving, and it will continue to attract interest from manufacturers and other types of companies looking to diversify away from China. Its macro-economic position is the envy of much of the world, and this could improve in a scenario where the US dollar weakens. Clearly the world as a whole is facing uncertainties, and there will be winners and losers ahead. Vietnam has signaled the ‘V’ for Victory sign against the devastating coronavirus, and this fast-growing country of 100m people is one to keep an eye out for in the months and years ahead.

Vietnam Holding Limited (LSE: VNH) can be purchased through your stockbroker, or wealth manager, and should be considered as a part of a diversified portolio for investors with a mid-to long-term investment horizon.

Author’s Note: the title ‘Viva Vietnam’ was first used by Standard Chartered Bank in 2003, when they correctly called the first growth cycle in Vietnam’s capital markets. I was working at Standard Chartered at the time and had successfully co-led an investment in a company that manufactured branded toiletries for the emerging consumer classes in south-east-Asia. They had a dominant position in the Malaysian market, a population of about 30m people, and a small but fast-growing business in Vietnam. During the due-diligence on the investment (which was a ‘home-run’ generating substantial gains), I was so taken by the incredible prospects that I moved my family to Vietnam for five years and helped Prudential invest across a wide-range of asset classes on behalf of its domestic customers.

The author of this article is Craig Martin, Chairman of Dynam capital (www.dynamcapital.com), a Guernsey regulated fund manager focused exclusively on the exciting opportunities in Vietnam. Dynam has a team of 12 Vietnamese professionals on the ground in Ho Chi Minh City.

Dynam is the Investment Manager for Vietnam Holding Limited (LON:VNH) an Investment Trust listed on the premium segment of the Main market of the London Stock Exchange.

Investing in the future of UK agriculture