Home Politics Brexit: Theresa May to meet with Merkel and Macron to secure delay 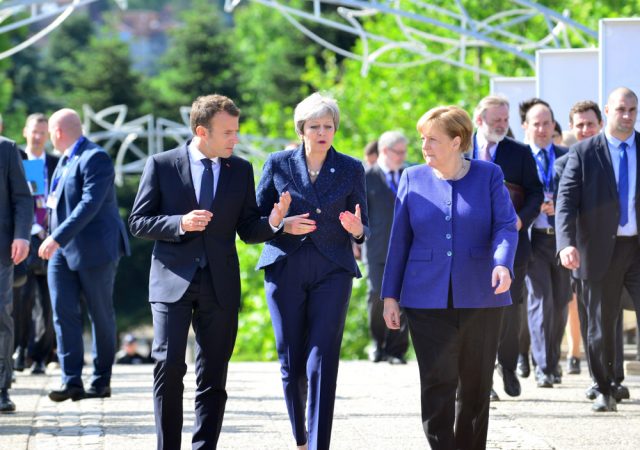 Brexit: Theresa May is holding last-minute talks with EU leaders in Berlin and Paris today as she seeks to drum up support for a further extension to Article 50.

The Prime Minister is in Berlin today to meet with The German Chancellor Angela Merkel to discuss securing a further Brexit delay until June 30.

She is also set to head to Paris later today to engage in last-minute talks with French President Emmanuel Macron over the same issue.

It is widely expected that the EU will grant the UK a lengthy extension proving longer than May has requested.

Nevertheless, according to reports, there are some reservations from member nations, suggesting May still has some schmoozing to do.

France alongside Greece, Slovenia, Austria and Spain are among those dubious of a longer extension.

There are shared concerns that the UK may have to participate in another round of EU elections as a result of a longer extension, which presents a bit of a democratic conundrum for the bloc.

Another key obstacle is it is felt that Theresa May has yet to provide evidence of a credible plan moving forward.

This only compounds doubts that she will prove unable to resolve the U.K’s domestic Brexit impasse in spite of an additional extension.

During her most recent trip to Brussels last month, the Prime Minister originally sought to push back the Article 50 deadline to June 30.

Instead, EU leaders opted to grant her a shorter extension until April 12 in light of those aforementioned concerns.

However, after May failed to pass her deal through Parliament on three separate occasions, she instead has now turned to Labour’s Jeremy Corbyn for cross-party talks, as she looks to finally deliver Brexit.

Two years on since the initial vote to leave, Brexit is still no closer to materialising, with continued uncertainty still, rather paradoxically, proving the only certainty.