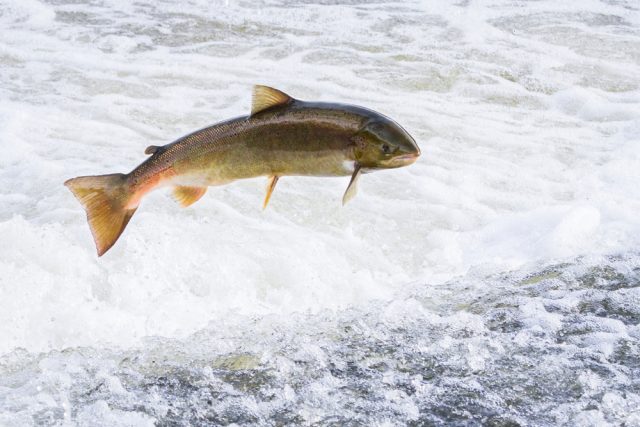 The Environment Agency announced the implementation of a series of new fishing restrictions to combat declines in salmon and sea trout stocks.

The new regulation is set to come into effect from the January 1st, in a bid to encourage greater prioritisation of sustainability within the UK’s fishing industry.

According to 2017 government figures, the UK’s waters have witnessed a marked decline in returning salmon across the last decade.

In fact, as many as 27 of the total rivers in the UK had been categorised by the findings as ‘probably at risk’, with an additional 9 already considered to be at ‘at risk’.

“It is only through continuing to take concerted action, and through the co-operation of others, that we will successfully protect this iconic fish for future generations.

We are not implementing these changes lightly and have consulted widely with those affected. There is no single solution to protecting salmon stocks; reducing the catch of salmon can only partly contribute to the recovery of salmon stocks.”

However, the shortages are not limited to the UK’s waters, with global salmon levels continuing to deplete alongside other marine life.

In fact, according to statistics, 90% of world marine fisheries are overfished or fully fished, with numbers only set to decline further, as high levels of plastic continue to pollute the world’s oceans at a remarkably rapid rate.

It’s not just government agencies that are ramping up efforts to improve the sustainability of the fishing industry.

Recently launched businesses, such as Pure Salmon, are championing a more socially conscious brand of fishing.

The business has said that the land-based alternative to fishing is a ‘proven and scalable method of aquaculture’.

Alongside promoting a more sustainable approach to fishing, the new technology is also set to ensure that its salmon produce is free of any chemicals, antibiotics, hormones, mercury and microplastic.

Moreover, because the fish will be produced closer to consumers, it hopes to achieve lower levels of harmful carbon emissions due to reduced transportation costs.

Stephane Farouze, Chairman and Founder of 8F, commented on the launch of the business: “We’re delighted to be launching what is the most exciting global development in land-based Atlantic salmon farming. We believe that RAS technology will be the leading driving force for growing salmon in a resource strained world, where producing sustainable food without further damaging our oceans is paramount.”

Whilst businesses such as Pure Salmon are leading the way in revolutionising fishing for the better, there is still some way to go to truly preserve the world’s oceans, amid staggering levels of plastic pollution.

Nevertheless, public awareness of the issue is on the rise. In fact, ‘single-use’ was recently named the word of Collins’ Dictionary’s word of the year for 2018.

What’s more, government’s too are increasingly beginning to prioritise the issue.

Back in October, the European Parliament voted for a complete ban on various single-use plastic goods.

The Environment Agency’s latest legislation decision is only a further indication of the strength of the growing momentum behind the cause.