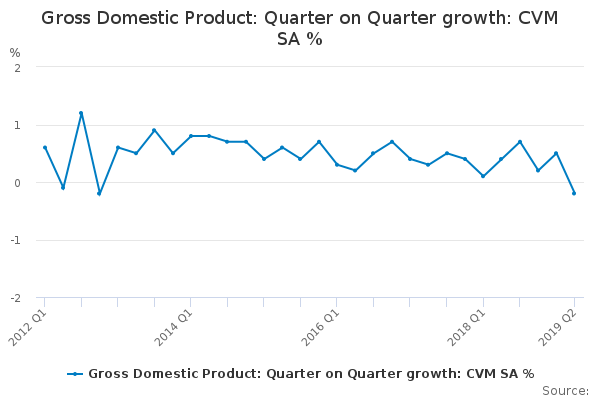 With discussion of a looming recession gaining traction with weakness in growth indicators, fundamentals and bond market inverted yield curves, today’s announcement from the Office of National Statistics has if anything compounded already tentative market sentiment. UK GDP (‘economy’) contracted by 0.2% against analysts’ predictions, making it the UK economy’s equal worst performance – with Q4 2012 – since the financial crash.

Consecutive economic contractions signify a recession, and there are three reasons this contraction is significant. First, there was surprising growth in the first quarter; second, growth in the second quarter was expected to be stagnant rather than negative; third, the political climate makes the next quarter’s prospects dubious at best.

Head of GDP at the ONS, Rob Kent-Smith, said both the manufacturing and construction sectors weakened.

“Manufacturing output fell back after a strong start to the year, with production brought forward ahead of the UK’s original departure date from the EU,”

He added, “the often-dominant service sector delivered virtually no growth at all”.

The ONS then said, “The path of GDP and some of its components has been particularly volatile through the year so far, largely reflecting changes in timing of activity related to the UK’s original planned exit date from the European Union in late March.”

“The economy has contracted over a quarter for the first time since 2012, raising the risk that the UK might be in a technical recession.”

“This figure though is set to be the worst in the G7. The UK should avoid a recession if expectations of growth in this quarter are fulfilled, but that is not guaranteed. It is not the welcoming present that a new chancellor and PM would have wanted.”

Today’s data do contain factors such as stockpiling and premature shutdowns, which flatter the first quarter and reflect badly on the second. However, macro scale forces such as poor global growth and mediocre volumes of investment, will weigh on wider market sentiment and are outside of the UK’s control.

“Growth has been pushed down by an unwind of stockpiling and car manufacturers shifting their seasonal shutdowns.”

“Nonetheless, it’s clear from our business surveys that underlying momentum remains lukewarm, choked by a combination of slower global growth and Brexit uncertainty.”

“As a result, business sentiment is dire.”

The CBI said today’s news was “concerning”. The problem is we’re not sure how seriously the UK is taking this news. That may sound like a ludicrous suggestion but realistically; political tit-for-tat has not halted as it normally does during a time of real economic turmoil, the news may be blamed on the reactionary behaviour of companies who feel unstable due to Brexit, and put bluntly, those who would support the uncertainty of a no-deal scenario are not opposed to a degree of economic turmoil (recession is bad for the general populace but provides an exciting investment opportunity – some Conservative members have already shorted failures in British companies).

Other market and macro financial news has come from; the FTSE and Sterling, the London Stock Exchange Group (LON: LSE), the US-China currency manipulation debacle, and analysts’ outlook for markets and currencies.