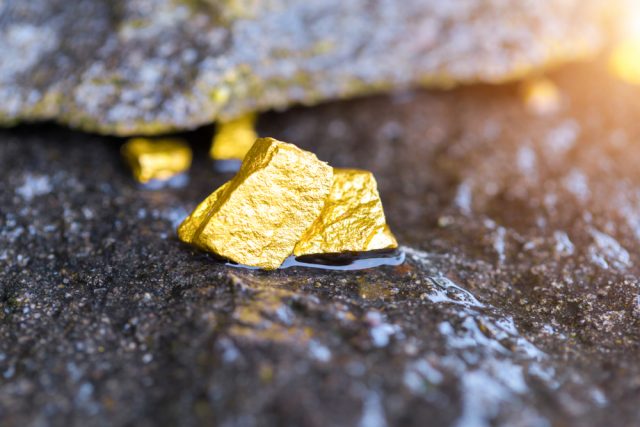 Rockfire Resources PLC (LON: ROCK) have seen their shares bounce on Tuesday afternoon, after the firm reported progress in its Australian operations.

At the end of November, shareholders of Rockfire saw their shares surge as the firm reported a new discovery.

The firm updated shareholders that it had returned broad consistent gold assays from a geophysical target on its Plateau gold project.

Of particular note was gold mineralisation occurring almost continuously throughout a 215 metre deep hole, including 177 metres at 0.5 grams per tonne gold, which sparked shareholder appetite.

Less than a week later, Rockfire once again struck gold. The firm added to the discovery last week by saying that the drilling of a new Breccia zone at the Plateau Gold deposit in Queensland, Australia has discovered high-grade, near-surface gold which caused shares to rally over 30%.

Today, the firm has updated the market saying that an induced polarisation geophysical survey has identified multiple anomalies at the miner’s 100%-owned Plateau gold deposit in Queensland, Australia.

Rockfire said large geophysical anomaly has been detected around and beneath BPL025 target, which intersected 177 metres at 0.5 grams per ton of gold.

The anomaly is a reported 350m wide and over 200m long, has proven to host gold mineralization near surface and provides multiple strong targets for gold exploration at depth, Rockfire explained.

Rockfire said it continues to await results from the remaining 11 drill holes from October Plateau drilling campaign and intends to extend the geophysical survey towards the east to track the gold anomaly further.

The reflection in share price movement on Tuesday shows how excited shareholders are to see the full potential of the young gold miner.

The good news comes at a good time for Rockfire Resources, as rival Panther Metals (NEX: PALM) had announced it had agreed its first exploration licence in the Northern Territory, Australia at the end of October.

Additionally, in the gold mining sector in similar fashion to Rockfire, Cora Gold saw their shares jump a week ago on a mineral resource estimation report.

Centamin said the following “Centamin said the offer “materially undervalues” the company and it is “better positioned” to deliver shareholder returns on its own rather than teaming up with Endeavour”.

Shareholders of Rockfire Resources should be very excited about the firms future, as it has given a host of impressive updates.

If the firm ends the year strongly, then 2020 could be a productive year for Rockfire which could see their shares rise.