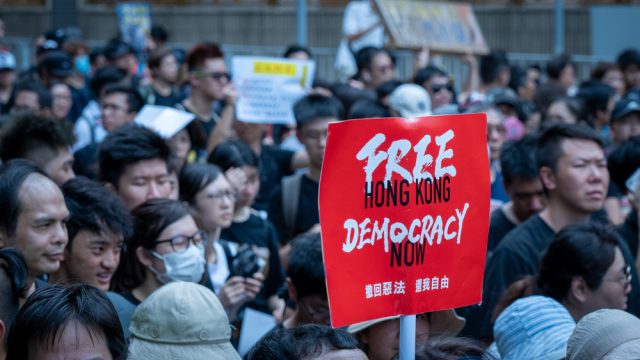 Today the world winced as Hong Kong authorities shot the first pro-democracy protester. Contemporaneously, China marked the 70th anniversary of the Communist Party’s rule with a jingoist tour de force and a cliche comic-book-villain-esque speech from Xi Jinping, who lauded the ‘unstoppable rise of China’. The resulting ominous aura following today’s developments was likely caused by the impression that China has no intention of maintaining either the regional or international status quo.

After succeeding in blocking the extradition bill, Hong Kong’s pro-democracy lobby has since upped the ante against looming Chinese influence, with escalating violence in clashes with authorities.  Today, though, the stalwart opposition to authoritarianism may have had a taste of things to come, with a teenage protestor being shot in the chest from point-blank range by a police officer.

Speaking on the incident, the Hong Kong police chief commented,

“At about 4pm, a large group of rioters attacked police officers near Tai Ho Road, and they continued with their attack after officers warned them to stop. As an officer felt his life was under serious threat, he fired a round at the assailant to save his own life and his colleagues’ lives.”

“The round hit an 18-year-old, and the area near his left shoulder was injured, and he was conscious when taken to Princess Margaret Hospital.”

“The police force really did not want to see anyone being injured, so we feel very sad about this. We warn rioters to stop breaking the law immediately, as we will strictly enforce the law.”

Responding to the shooting and what appears to be a sentiment of limited remorse from Hong Kong authorities, Amnesty International issued the following statement,

“The shooting of a protester in Hong Kong marks an alarming development in the police’s response to protests.”

“We call on the Hong Kong authorities to launch a prompt and effective investigation into the sequence of events that left a teenager fighting for his life in hospital.”

“We are urging the Hong Kong authorities to urgently review their approach in policing the protests in order to de-escalate the situation and prevent more lives being put at risk.”

Unfortunately, things will likely worsen before they improve. On the one hand, you have a highly educated and prosperous populace, who will not soon relinquish the democratic rights that have been afforded to them, and will actively resist pernicious (and perhaps soon more overt) influence being exerted by China. On the other hand, you have a growing, hungry dragon, already being poked by Donald Trump. Already at loggerheads with their rival for global hegemony, China won’t take kindly to resistance on its own doorstep, let alone in an area that gives it a strategic foothold in the world of financial services. Beyond that, though, China’s willingness to heavily intervene in its own economy and put on a military parade belonging in a bygone era, shows us that its intentions go well beyond money.

When Xi Jinping talks about the unstoppable rise of China, he is referring to dominance in all spheres. After decades of oppressing its own people (including a case being brought before the European Court of Human Rights this week, with China being accused of harvesting organs from falsely imprisoned Islamic minorities) and making strides toward extending its influence on a global scale (most audaciously with its role in the Hinkley power station and the Hong Kong Exchange’s bid for the London Stock Exchange a few weeks ago), the race to build a ruthless, unified and nigh-on dystopian superpower is well under-way, and the fact that Hong Kong protestors haven’t been quelled with extreme prejudice is – in my opinion – nothing short of remarkable.

“Today we are out to tell the Communist Party that Hong Kong people have nothing to celebrate.

“We are mourning that in 70 years of Communist Party rule, the democratic rights of people in Hong Kong and China are being denied. We will continue to fight.”

What happens in the coming weeks could potentially set a precedent for future political conflict. If China extinguishes the voices Hong Kong – a small chrysalis of modern free market liberalism – it could potentially throw down a gauntlet that lets the West know that it will go well beyond tariffs, if necessary.